Wherein I Don't Even Mention Candy

Okay, so yesterday I buzzed around the house cleaning up the Halloween stuff so we could put the Halloween bins in the attic before my sisters-in-law arrived today. I kept thinking I was done, but - just as with the Christmas decorations - I kept stumbling across more items (and believe me, we don't have that much!). So, finally, after stuffing the Halloween place mats into the almost full bin and feeling confident I had slayed that particular beast, I asked Larry to put everything in the attic.

We know where this is going, right?

Not half an hour after he did so, I entered the kitchen (where I had spent at least HALF my waking hours that day) and saw this facing me from the opposite wall: 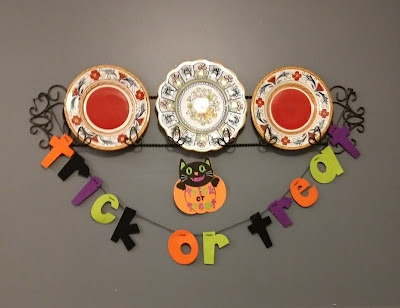 Yup, not exactly hidden - but, hey, after the paper chains incident from January, I suppose I knew anything was possible.

As discussed in these pages recently, our dishwasher has chosen this week to go on the blink. Normally, this wouldn't be a big deal. I'd feed the kids cheap pizza half the nights and we'd muddle through with minimal cooking and paper plates. BUT this is the week that both my sisters-in-law are coming to visit. That means a heck of a lot of cooking and a heck of a lot of pots and pans to clean. That also means our lucky guests get to hear me at my best, haranguing the kids for using out an extra knife or leaving their plates in the sink instead of washing them and putting them in the dish drainer.

Yes, the Michael Graves dish drying rack is BACK. I held on to it, because I knew that there would be a day I would need it again. Unfortunately, I neglected to share this info with Larry; so he apparently threw out the rubber mat that goes underneath it during one of his many dump expeditions during the Great Basement Remodel this past winter.

It is a testament to the strength of our marriage that I am still speaking to him. It helps that I still have this stupid cold and am too tired to fight. I am trying hard not to think of all the crap that is still in the laundry room that I would have happily seen taken to the dump instead.