The Age of Innocence

There is a bevy of little girls in my neighborhood, all near Rachel's age. They trooped into my house yesterday afternoon, sweetly alike with their pigtail braids and their hair ribbons. Clutching their American Girl dolls (well, all except Rachel, who has repeatedly refused my offer of an American Girl knock-off), they headed down to the playroom, little Susie trailing in their wake with her cheap-o baby doll. I continued with my housework/blogging, reveling in the fact that Rachel was finally playing with dolls (albeit not her own). It had distressed me to see her former lack of interest in this little-girl pursuit, particularly as I remember so many happy hours of my own youth spent playing Barbies with my friends.

Where was I? Oh, yes - Downstairs later to do some laundry, I paused briefly in the doorway of the playroom. The girls were all sitting in a circle with their dollies. "Tea party?" I chirped as I glanced inside, and then I stopped. Did a doubletake, as it were... 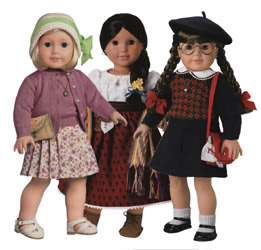 Each doll (including Susie's innocent little babe-in-arms) had a pile of poker chips in front of her. Rachel was dealing. It was a veritable American Girls gambling den.

You can find all the accessories in the upcoming catalog, I'm sure - visors, cigars, maybe even a mini-print of that picture with the doggies playing pool. The merchandising possibilities are legion. Any suggestions?