Excuse my disappearance (what do you mean, you didn't notice? Hmmph...), but we just endured 2 days without the beloved Internet. 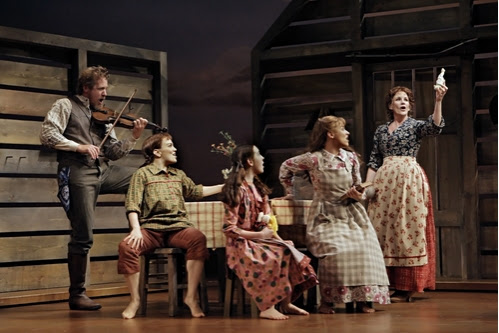 I know, I know...it was hard. Last night we were all sitting around looking at each other and saying, "Now what?" I mean, it was like Little House on the Prairie or something. Unfortunately, Larry doesn't know how to play the fiddle; so instead the kids all went downstairs and watched a 3 Stooges DVD.

I don't know why the Ingalls family never thought of that.

So now I have approximately a zillion blog posts to catch up on. I mean, look at what happens when I'm out of the loop - Bia (!) jets off to Las Vegas (without her husband!). You know, I would have voted her the mommy blogger the least likely to do something like that. (And remember, Bia, what happens in Vegas....)

Anyway, the Verizon man just left and he's my hero. Does anyone out there realize how hard it is to live without Internet access these days? Seriously, even without a blogging addiction - every 2 minutes we needed to look up a phone number, or a time, or order some knitting supplies - and we couldn't. I got an earful from Larry for having tidily recycled the humongous phonebook the phone company insists on leaving on our doorstep every December - so I'm afraid that, once again, his packrat tendencies have been justified.

Where am I going with this? Nowhere, really; just wanted everyone to know I'm not dead yet. I seem to have missed the fridge post this week; but that just means it will be bigger and better next Wednesday, right? And now the little girls are whining because I am back on the computer - it looks as though I'll have to re-acclimate them to maternal neglect again. Or maybe just bribe them with chocolate.

Speaking of which, Larry recently switched jobs (because he's shiftless that way) and he had to empty last year's Halloween candy out of his old desk. Naturally, I pounced on it when he brought it home (um, so the children wouldn't eat it, of course). Just for the record, Halloween candy? In January? Doesn't taste too good. Especially the Almond Joys.

Yes, Larry, I know - you're not shiftless. It's a joke, because really - that is the last word that would describe you. It would be like calling Santa stingy, or...or...our President-elect inarticulate. Got that, everyone? Larry is not shiftless. He is, however, a tad touchy.
on January 15, 2009