We've been having a family UNO tournament of sorts. We've even got Larry playing. Mean mother that I am, this afternoon I caught Rachel out for not saying "UNO" and made her cry. A lot. Her cute braided pigtails made it seem even more pathetic. But, hey, she looked cute the whole time she was stuffing toilets and decapitating stuffed animals, too.

Larry felt sorry for her, but that's because he doesn't know how to compete.

*********************
We bought a dishwasher back in August 2007, after summarily finishing off the old one we inherited with this house. This new appliance was my favorite dishwasher ever. It held everything, and didn't have lots of silly little compartments to get in the way of the large dishes and pans. I was, quite frankly, head over heels crazy in love with it. And I thought it felt the same about me, the way it faithfully scrubbed all our eating and cooking implements clean twice a day, every day, week in and week out.

Well, the love affair is over. It ended the way these things do, with blatant betrayal. Today we attempted to run it and discovered that the latch inside the door is broken.

A cheap part, but an expensive problem. KitchenAid, you have broken my heart. And my wallet...

Silver lining (there had to be one, right?) - Anna gets to wash dishes by hand. Since she already thinks we are raising her Amish (no IPod, no cellphone), this situation should suit her just fine.

Oh, Lordy, I can't believe it - Dustin Hoffman is back. I love Dustin Hoffman, with a devotion fierce and unchanging. Unlike that trampish Mrs G over at Derfwad Manor, I'm a one-secret-boyfriend type of gal (oh, hush about that Matt Damon thing - it meant nothing to me); and, really, how can a woman even think about making a guy like Dustin share his space in her heart? 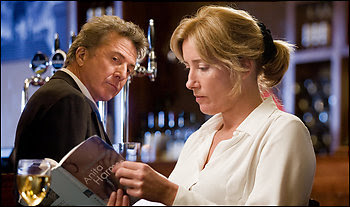 Look at that, will you? Emma must be melting inside, with Dustin gazing at her that way. Look at those sexy eyes, that short stocky build...

Would someone open a window in here? It's so hot...