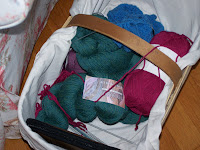 Time for a knitting update. I don't know why it is time, but it is. I even took pictures. Although, now that I look at them, I think I'll have to find a background less glaringly red than the slipcover on my beloved Ektorp ottoman (with removable top, so you can shove all sorts of junk in there before company comes).

I've been working on this top-down baby raglan sweater. If there is anything I hate, it is knitting something in separate pieces and then having to sew them together. If I want 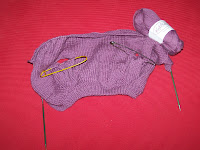 ed to sew, I wouldn't be knitting. Duh. This sweater is knitted in one piece from the top, leaving the sleeve stitches on holders to come back to at the end (like knitting a mitten with 2 thumbs) (sort of).

I am thrilled, thrilled, thrilled with the pattern; although I don't understand why I can never knit small enough for gauge. The pattern already calls for small needles (sizes 2 and 4), and I wanted to weep at the thought of knitting a sweater on needles even tinier than that. So I decided to use sock yarn instead of sport weight for the sweater. We'll see how that works out. Probably not very well...

I know it is hard to believe for the uninitiated among you, but the info in the above paragraph interests knitters. You non-knitting readers out there, just be glad I didn't start discussing the buttonholes. (Oh, but those are exciting, too! I've never done them before!)

I am almost done with the first sock of a pair (if I would ever get off this computer) (darn you, Facebook and Twitter!). I was surprised to find that the yarn I chose for the socks is self-striping (I 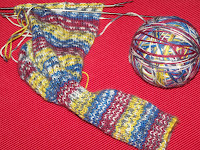 am easily surprised, okay?). I am finding it to be a lot of fun, waiting for a new color stripe to come around again (also, easily amused).

I actually managed to finish (shocking, I know) a pink Cascades superwash wool hat for my friend's baby. I don't know if my friend really liked it, but she at least pretended she did; and that's good enough for me (thanks!). I forgot to take a picture of it, though.

There are other assorted projects lying around here, but I am trying not to think about them right now. Most of them are stalled out because I made some mistake (alas, my first lace project!) and am dreading the work it will take to fix it. Or because I was almost finished with something and realized I didn't like the way it was turning out. So I am ignoring them.

You can do that with knitting. Not with kids, though. So maybe I should go see who is screaming upstairs and why my teen daughter is sulking in the kitchen...
on January 28, 2009