5 Minutes Of Fame (The Transcript)

Apparently, Rachel was a full decade ahead of her time. Look what they are selling in Target right now: 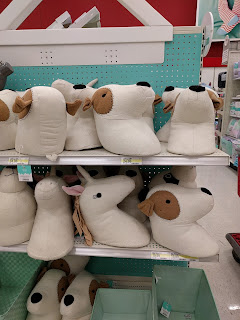 That's right - the severed heads of stuffed animals. If only we had thought to market Rachel's creations, all those years ago...it might have paid for all the toilet repairs her mischief-making necessitated.

Which reminds me, I never posted the text of my 2016 LTYM piece here. I can remedy that right now. Better 8 months late than never, I say...

A long time ago, in a universe far, far away, my husband Larry and I were the experienced parents of 6 children, ages 14 on down; and we ran our household with an iron hand.  There were bedtimes, and rules at meals, and offspring doing chores without whining.  It was, in retrospect, a veritable paradise, wherein dwelled children who listened to their parents and behaved, for the most part, appropriately.  And Larry and I looked at what we had created and saw that it was good.

You see, we prided ourselves on that, for WE were in control.  We KNEW that our children behaved well because we set strict boundaries, disciplined miscreants, and generally enforced law and order.  We KNEW that we were forming in our children a lifetime (6 lifetimes, really) of good habits, proper manners, and sensible decision-making.

Then our 5th child, Rachel, turned 4.  And as a newly minted 4-year-old, she became obsessed with mischief-making. When she wasn’t hiding objects in our toilets and deluging unsuspecting victims with not-at-all-clean toilet water, she whiled away her time by taking scissors to electrical wires around the house; she also enjoyed cutting heart shapes out of random items, including our good clothes and our wool blankets. What’s more, she would tape these hearts on a wall, sometimes with a piece of severed electrical cord affixed beneath them, for all the world like a preschooler gang sign.

Naturally, being parents who wouldn’t stand for any such nonsense, we swung into corrective action: we locked the bathrooms, hid all pairs of scissors, disciplined Rachel appropriately, and kept what we thought was an eagle eye on our little loose cannon. But, apparently, we were no match for her Houdini-like abilities. The plumber continued to pay us regular visits, and electrical tape was a frequent item on our shopping list. It was getting to the point, in fact, where Larry dreaded coming home from work, as he didn't want to hear about the latest Rachel exploit when what he really needed was a beer and some peace and quiet.

I was living some bad I Love Lucy episode, actually - just picture my husband as Desi Arnaz, brandishing his alarm clock with the cord snipped in two and saying, "Looocy, you have some 'splainin' to do!" And me standing there, wringing my hands, and insisting, "I didn't take my eyes off her for a minute, Ricky!"

At one point, Rachel laid off hiding our cellphones in the toilet and damaging electrical cords to pursue what appeared to be her true calling – that of amateur taxidermist. This hobby of hers had started simply, with the beheading of a mere stuffed frog or two, but it soon got out of hand. Every day, somewhere in our house, Larry or I would stumble upon mute witness to her obsession - nothing big, just a headless stuffed bear or other plush animal, with its arms sticking out as if to plead, "Help me!" And the head would be nowhere in sight. Because Rachel had hidden it.

Yes, that’s right – we had a 4-year-old girl who was decapitating stuffed animals and collecting their heads. She needed them, you see, so that later – when we weren’t looking - she could mount them on our walls, hunting-trophy style.

Now, I had thumbed through many a child development book in my day; and I just didn't recall seeing this sort of thing mentioned in "Your Child at Four" or "The Magic Years." She hadn't, of course, victimized her own favorite, a very attractive stuffed rabbit. So Larry, feeling desperate, told her that he would take Bunny away if he found another headless body. That's right, folks – my husband actually said to his little girl, "Stop the funny stuff, sweetheart, or your rabbit gets it!"

The next day?  There appeared yet another headless bear, and Bunny? Well, that rabbit was nowhere to be found.

Because Rachel had hidden it.

Recall, if you will, all those Bugs Bunny episodes where Elmer Fudd jumps up and down with steam coming out of his ears as he says, "Oooh, that wascally wabbit!" That is exactly what Larry looked like when he realized he'd been outsmarted by a 4-year-old. I must admit, I hadn’t laughed so hard in years.

And believe me, I needed that laugh. This was a difficult time for us. Virtually overnight, Rachel had reduced us from confident, in-charge authority figures to those hapless sitcom-esque parents we despised, begging our 4-year-old girl with the big eyes and the cute curls to "please, please tell us where Daddy's cellphone is, honey!" Every night, we searched her room for hidden scissors and other implements of destruction and then proceeded to lie in bed together, listening warily for the sound of the motion detector Larry had installed over Rachel’s door. Oh, how the mighty had fallen...

It’s been several years now since our lives were turned upside down by a not-so-innocent 4-year-old.  The child in question has grown into a teen with no obvious criminal tendencies, thank goodness, although Larry and I have held onto some of the habits she inspired us to adopt – you know, habits like sleeping with our car keys so they wouldn’t fall into her hands.  Rachel herself has little to no memory of any of this. Unfortunately, that means we will never find out just how she managed to remove (and disembowel) that motion detector placed high above her doorway. Some mysteries, I suppose, are just not meant to be solved.  And, no, we never figured out where she hid that stuffed rabbit, either.